Reno Collective will soon be taking up new digs inside the primary retail space in Arlington Towers, affectionately called the 'Fishbowl' already by Collectians soon to take up residence there. Reno Collective is holding a town hall meeting (and Happy Hour) Friday night in the space at 100 North Arlington Street, to discuss what can be done with the space, transitioning over, and generally geek out on the fact that the Collective is headed back to its roots in downtown proper. I sort of consider their current home on California Avenue downtown, but it's a strange amorphous gray zone between Midtown and Downtown that doesn't seem to belong to either.

Reno Collective, in case you aren't aware, is a co-working space which allows startups, tech gurus, and people who want to escape their home offices to actually get some work done to co-mingle, exchange ideas, and well, get some work done.

It was started back in 2007 by cofounders Colin Loretz and Ed Atkins, the same Ed Atkins also spearheads the Santa Crawl and several other 'official' bar crawls. There was no official building or location for Reno Collective until 2010, when it moved into the newly completed 250 Bell Street project, the very cool brightly colored building you can't miss over on Bell Street just west of downtown. It launched with 1,200 square feet and about 10-15 members who signed up for the co working space right away.

In 2011, the Collective moved over to Lander Street where it currently resides, mainly because the rent was cheaper, but they also gained more space and a very different building architecturally speaking. The Collective grew to four owners, including John Jusayan, Don Morrison and Chris Yoder, along with Colin Loretz. It has become a very collaborative environment where both members and its owners chip in time to keep the Collective running, which has now graduated past the losing money/breaking even stage and has become a viable necessity for many independently driven workers in the tech industry. The foursome also developed the Hack4Reno event, which has become a bit of a phenomenon. 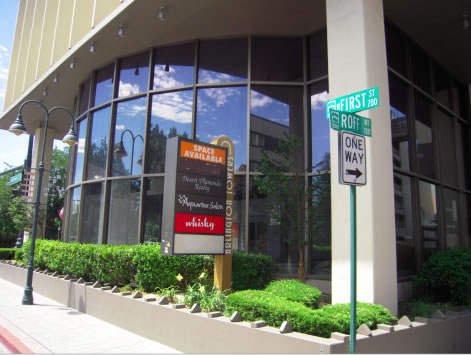 And now once again two years later, the Collective has outgrown its space and needs to stretch its tech wings a bit further. I have known since June that Colin was eying different locations downtown, and at one time was taking a look at the office space located above Bruka Theater in the Masonic Temple building, but It appears they have chosen the mostly-glass-walled retail space in Arlington Towers fronting First Street, the alley and Arlington Avenue. I think it's the perfect space, giving them a lot of room to breathe and also producing an 'oooh-what's-going-on-inside-that-office effect for tourists and random people who stroll by and catch a glimpse of geniuses at work. Arlington Tower residents will be happy it's not another bar, and that smart people who are 'in the zone' don't make much noise (or do they? mwhahahahah.)

As part of moving into the new office, the Collective plans to offer more classes for web, programming, and even business strategies for startups.

A coworking space is often the first stop for someone with a great tech-related idea, who needs to foster and grow their idea with others in the same boat. While it's fine and dandy to lure giant companies to town with tax incentives and packages, those tax incentives do nothing for the intelligent peeps who have a great idea and need office space while they hunt for capital and debug their creations. These could be the future Mark Zuckerbergs, the future Kevin Systroms, the future Colin Loretzes. I added the last one because he already has pet-projects in the works such as Cloudsnap.

I only wish more space downtown could be dedicated to temporary startups. Imagine the Woolworths building for example to be repurposed as a t-shirt printing company startup or other space that needs some light manufacturing room. Could happen!