So let's check out the presentation the City Council will receive Wednesday for the Bus Rapid Transit system and beyond. This is really exciting stuff.

For most of 2009, a consortium of people including representatives from the City Manager’s Office, Community Development, Public Works, RDA, and RTC have been meeting, and meeting, and meeting some more, about transportation option along the South Virginia Transit Corridor. Five sub-groups have been formed (Planning, Engineering, Finance, Public Relations, and Operations/Maintenance) to focus on this project and the mass amounts of work to be done concurrently. 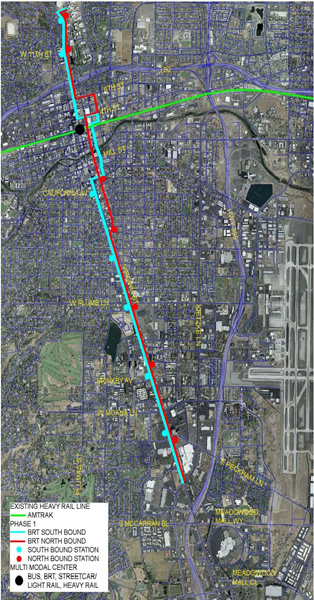 Station Requirements – This code amendment has been added to the program of Reno Municipal Code amendments to be processed in FY 2009/2010.

Complete Streets Project (a.k.a., Streetscape Standards) – This Redevelopment Agency project will be completed in conjunction with the lane, parking and sidewalk reconfiguration project to be completed by City staff and the RTC BRT stations project in FY 2009/2010.

Virginia Street Bridge – The Public Works Department is including the requirement for the new bridge to support a light rail train in the design specifications.

Multimodal Center – It is intended to create the region’s major transportation hub by connecting Virginia Street (current Sierra Spirit circulator and future streetcar line) with the Amtrak Station (intercity rail) and Fourth Street Transit Center (local bus, bus rapid transit and possible future light rail lines with connections to the Reno Tahoe International Airport and Reno Stead Airport). One of the possible funding sources that may be utilized is the ReTRAC enhancement funds from the Federal government. This funding source exceeds $500,000. Specific improvements that could be funded, depending on cost, are pedestrian amenities, signage and a bridge over the ReTRAC south of the new Fourth Street Transit Station. 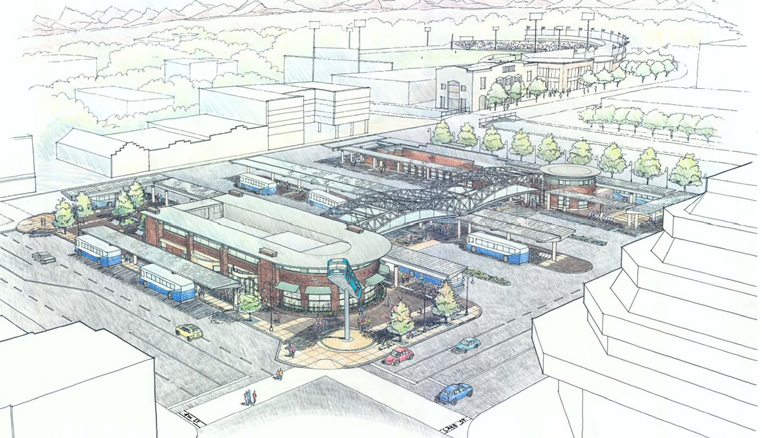 Based on some hardcore research by working groups it is estimated that capital costs for the first phase of the streetcar system (Phase 2 of overall concept) will be $45 million for northbound and southbound tracks spanning 1.5 miles on Virginia Street, between Lawlor Events Center and California Avenue. This includes the cost for rails, electrification, streetcars, and transit stations. There is also an additional $22 million required for a maintenance/storage facility and one mile of track that would carry streetcars back and forth to the facility. If the entire capital cost for Phase 2 of the overall concept ($67 million) is financed by a thirty year bond issued at a 6% interest rate, the total annual capital cost for the first phase of the streetcar project is expected to be $4.8 million.

The estimated average annual operations and maintenance costs for the entire system (Phases 2 and 3 of the overall concept) is $3 million, depending upon the number of streetcars, operating hours, etc. The current annual passenger volume for RTC Route 1 (Virginia Street Corridor) is approximately 1,720,000 riders. For fiscal year 2008/2009, RTC reported that the average fare was 88 cents per rider; therefore, RTC collected approximately $1.5 million dollars for this route. If all of these riders began riding the streetcar; which is unlikely as many of them will continue to ride on buses until they no longer operate on Virginia Street, the streetcar fares will have to be set well above the average bus fare on this route and/or be subsidized with other funding to cover annual operating/maintenance costs. Hence, the $3 million annual maintenance and operation cost is included in determining total new funding needs.

Finally, the establishment of an annual sinking fund is recommended for replacement of that portion of the system that may be deteriorated beyond repair (i.e., vehicles, electronic equipment, etc.) on a thirty year cycle; which, based on preliminary costs of approximately $50 million for replacement needs throughout the entire system, equals $1.7 million per year.
The annual funding could be reduced once the construction costs are paid (i.e., only sinking fund and operation operations and maintenance funds would be required). Other options include continuing construction funding to expand the system (e.g., East Fourth Street or Mill Street to the Airport), or deciding at some point in the future if the construction funding should be maintained and the system expanded.
At this point, staff recommends that the funding needs also be limited to Phase 2 of the overall concept (i.e., between Lawlor Events Center and California Avenue plus the required maintenance/storage facility and “service track”). This will provide an interconnection between the streetcar and BRT systems (Phase 1 of the overall concept) in the California Avenue area. The streetcar would essentially replace Sierra Spirit.
A comprehensive funding package for this project will be proposed by the finance sub-group. The potential sources of funding include a property tax, a sales tax, some sort of tax on tourists, tax increment funds, Federal funds, etc. A countywide transit sales tax failed on the last ballot and there are limited tax increment funds available, so staff does not view these as viable alternatives at this point. Two of the initial recommendations are a City of Reno property tax increase, in the form of a property tax override, and pursuit of Federal funds for a streetcar/light rail transit “start up” project. The property tax could be placed before the voters in November 2010. If approved by the voters, legislation would be pursued in 2011 with construction being initiated in 2012 and completed in 2013. Of course, any Federal funds or other funding source would offset the amount needed from property taxes. Before a final decision on placing this property tax on the ballot is made by the City Council, this proposal should be evaluated in the context of other potential City property tax ballot issues (e.g., police facilities, parks and recreation facilities), and the state of the economy.
Currently a one cent increase in property taxes yields approximately $850,000 per year. The current tax rate is 0.9456 ($0.95 per $100 of assessed value). The following table identifies the projected annual costs (capital, operations and maintenance, and sinking funds) of the proposed project, by phase, and projected total annual 30-year property tax rate increase, based on the percentage of the project that would be funded through a ballot initiative.

Post your comments
Posted by: DJ - 10/7/2009 12:30:30 AM
This all sounds rather exciting, but I'm a bi confused as to where exactly the proposed light rail system would be located within the boundaries of Virginia Street itself. Would it take up the middle lane? Be elevated? And when would (I suppose it would be Phase IV) begin construction? I for one am excited to try out the new RAPID route, It will be nice to have a rapid link between Campus and the mall!

Posted by: mattyo - 10/7/2009 8:41:31 PM
Mike, great job. Such informative information, it shows Reno is really growing up! This is a major leap forward in urbanization for the entire city

Posted by: Mr. Reno - 10/12/2009 11:44:31 AM
Street cars are different than light rail. They generally operate within existing vehicle right of way. Think San Francisco and Portland, OR. Portland's street car is a great model and provides easy circualtion downtown and to their very urban State University. I imagine Reno's campus link would be similar.

Posted by: Jay - 9/12/2010 8:45:21 PM
If you do not wish to post this that's fine, but take it as an alternative idea. I am all for light rail in Northern Nevada, BUT NOT DOWN VIRGINIA STREET between 4th and Center/Mary St. Take this idea instead as an option (obviously in phases): Build a light-rail (bart, trolley) line that eventually stretches from Minden, north along the west side of Carson City, up through Washoe Valley, the Sierra Summit Mall, snake it through South Meadows, and keep it east of 395 so that it has a stop at the airport. Continue past the GSR, west towards downtown along the trench and underneath 3rd street. Near the bus depot have a transfer station that allows you to switch to a loop that goes to UNR, the North Valleys, back east towards Spanish Springs, south towards I-80 (maybe down the middle of Sparks Blvd) and back to downtown. The west line continues towards Verdi. Center and Sierra should be adjusted to connect the two roadways (like an inverted tear drop) south on Virginia Street Near Mary St and on the north side of the UNR campus. Allow the bus rapid transit system, or the rail car you propose, to run Virginia street between Meadowood Mall and Center street, following the teardrop, around on Sierra and Back to Virginia. The Entire system is one big loop that interconnects throughout the entire region. Then you can close off Virginia Street between 1st and 4th leaving 2nd, Commercial, and 3rd open. Make it an open mall redesigning the buildings to look as old Virginia street did in the 30's and 40's (in that character). Design the open mall so that barrier posts can be removed and you can still allow for cruising, street parties, and the like. Interconnect all of the bus routes and streets so that traffic can easily flow through and around the community. Washoe County is no longer a small town. There are over 400,000 people in the region and we need to plan for the long term.

Posted by: Anakin-Marc - 9/12/2010 9:49:29 PM
Jay, I like that proposal. Just a slight change I would do, have the light rail line along Virginia Street until the Park Lane site. At the Park Lane site, the line could leave the Virginia Street right of way, go through the site (and a new open-air mixed use complex, modeled after successful projects such as San Jose's Santana Row and ), crossing Plumb just east of Virginia Street. The line could then continue along Holcomb (with Mt Rose Station replacing the current car lot just north of the Wells Ave turnoff. As there is only one planned stop between Mt Rose and Downtown Reno, the line can continue along Holcomb until Sinclair, then follow Sinclair and Lake, going past the Discovery Museum, Auto Museum, Sienna, and planned development at the Riverside Towers lot and Mizpah site, into Downtown Reno and the 4th Street Station. In addition to moving the right-of-way onto a lightly-used route, the line along Sinclair can help to spur development in a currently blighted area of the city (especially the area around the Lakemill and City Center Apartments). I had previously suggested following Holcomb all the way to the River and rebuilding the VTRR bridge, but upon further research, the route along Sinclair, with its preexisting bridge and public right-of-way for the road, would be far more efficient use of land, leaving the Grant Landing site open for further commercial development, or at the very least, parking for the ballpark complex (a bridge either replacing the VTRR bridge, or ideally connecting Museum Drive to the former NevInn Road, would provide convenient access to the ballpark). A spur line could go along Moran, crossing Virginia and continuing along California to the (possibly planned) California/Liberty/Arlington roundabout. This spur can also continue east of Sinclair to Wells, then turn south on Wells to the Mt Rose Station. A BRT line can be maintained along Virginia Street if desired, and the current Rapid Connect line would continue to provide service to stops between the stations.

Posted by: Anakin-Marc - 9/12/2010 10:06:11 PM
BTW, regarding the Moran spur... Historically, Moran was used as a streetcar right-of-way for the Reno Traction Company. If a spur line were run along Moran, it could be part of a California-Wells line, and designed as a heritage railway, connecting two 2 very distinct, pedestrian-oriented areas of the city, and would blend in very well with the existing nature of both neighborhoods. BTW, Jay, are you thinking of what I'm thinking with regards to your idea of extending to Carson City: Following the former VTRR right-of-way through Washoe City, Washoe Valley, a stop at WNC, and then going along Washington St and having the terminal at the old VTRR train station at Washington and Carson? The old VTRR train yard is still an empty lot, and could easily be utilized for a Carson City light rail yard. What better legacy for a railroad that could be credited with much of the development of the region than to bring it back in modern form?