As I walked downtown today, I noticed Mill Street was recently added to the growing number of streets downtown being restriped with bike lanes in each direction. Mill Street joins California Avenue, Arlington Avenue, 7th Street, Wells Avenue and soon-to-be Holcomb Avenue in a series of connecting bike lanes that rivals or surpasses bike lane route systems in other cities. 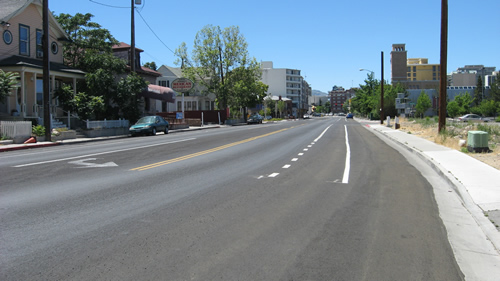 It is now possible for people to bike safely from the southeast Well Avenue area, and Southwest and Suburban Southwest Reno, all the way to downtown, or over to Sparks.

My map is not perfect and it also includes future bike lanes to be built in the next couple of months, such as Holcomb Avenue. It only includes areas where I have biked, so it may be missing some lanes. If you know of some bike lanes in central Reno not on this map let me know!

There are certainly critics of bike lanes, particularly in Reno, where drivers were less than happy about losing a traffic lane in each direction to make room for a dedicated bike lane. However let's look at the benefits of bike lanes:

There are lots of studies out there to back these findings:

So get out an bike! We have a few months of good weather left before the big chill sets in.

Post your comments
Posted by: Michael - 8/1/2010 8:40:07 PM
Is a bike lane planned for Lakeside from Plumb to Windy Hill like you show on the map? I ride this all the time to work and Moana to McCarran is the worst spot so that'd be great if a lane is planned for there. And I'm a huge fan of the lanes - it's one of the best city planning projects to happen for a while in Reno.

Posted by: Wiley_n_Reno - 8/1/2010 9:39:14 PM
Reno has incredible bike user potential. It's in a valley and is pretty flat North to South and East to West. No reason not to expand this except for the usual Reno area "hate-everything's".

Posted by: DowntownMakeoverDude - 8/1/2010 11:27:37 PM
The Lakeside and Holcomb extensions aren't done yet but were based on RTC and City Council staff reports. There might be a chance they chose Arlington over Lakeside but I know Lakeside was in the original staff report. Thanks for your input I will modify the map

Posted by: Washoe Greens - 8/2/2010 9:00:14 AM
Photo is not quite a bike lane yet. Needs a stencil of a bike and an arrow to complete. Why? So bikers will go the correct direction which most don't in this down. Why important? The wrong way is *DEADLY* and results in the statistic that most bike accidents are the biker's fault. Many so-called bike lanes in Reno are not. They are shoulders. A bike lane has to look like your pic with TWO parallel stripes. When drivers see this they automatically driver more safely around bikes, a huge issue in Reno. These are all popping up all over the South of town where I live. This is very, very exciting stuff. Thx for posting!

Posted by: DowntownMakeoverDude - 8/2/2010 9:30:39 AM
Good to know Washoe Greens! Hopefully they will stencil that in and complete it, especially if it adds a significant safety factor.

Posted by: Reno Rambler - 8/3/2010 7:27:09 PM
Great post with lots of good info. I serve on the RTC BPAC and as I recall Lakeside south of Moana is being proposed as a potential road diet (I don't have my list with me so don't quote me on that). So far this year 24 more miles of bike lanes have been added to the area with more scheduled for the end of this year and into 2011. Very exciting times for Cyclists in Reno! Keep using and talking up those bike lanes! Let your city council members know you appreciate their support.