Things to pay attention to in the next Reno City Council meeting include adopting digital sign standards, taking the ReTRAC covers one step further, installing public restrooms at some bus stops, and more.

With all the buzz about the Siena possibly becoming a Marriott, we can't forget about the other Marriott. Ground work and floodwall reinforcement looks to be nearly complete, with foundation work beginning.

Siena In Talks to Go Back to Its Roots

Only the most hardcore Reno natives would know that the Siena, back when it was the Holiday Hotel, actually opened up in 1958 WITHOUT a casino. It was a non-gaming hotel on the river, and the casino was only added later. Hotels like Harrah's downtown are casinos with a hotel added on, but the Holiday was a hotel first, with a casino added on.

Since 1999, the casino has literally not made a dime of money. I don't need a 'source' to tell me this, it's painfully obvious when you visit the Siena on a Friday or Saturday.

Yet, during the weekends, esepcially in the summer, the hotel portion often comes close to selling out.

So, it wasn't necessarily shocking when I learned from an unnamed source that Fernando Leal, developer of the Montage and CommRow (now Whitney Peak Hotel) has bought the Siena.

Check out a few photos of ground work beginning for the long-delayed Courtyard Marriott downtown across from Reno Aces Ballpark.

The long-delayed downtown Marriott-brand hotel slated for the now-vacant lot next to the Jones vargis Tower at 300 East Second Street, is finally moving forward. Permits were pulled on the project to the tune of $9 million. It will be four floors and feature 134 rooms. Click here for the permit details. 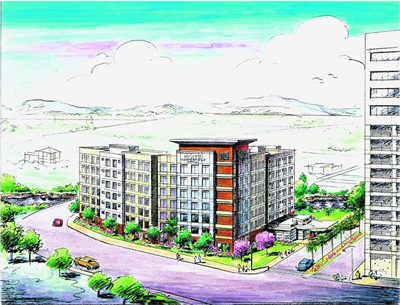 Go on a photo tour of Whitney Peak Hotel including the lobby, Basecamp, the new hotel rooms, Heritage Restaurant and Cargo! They are putting the final touches on for their grand opening. Check out my photo

In The News: Morris Burner Hotel

Have you seen the incredible rooms being assembled/painted at the Morris Hotel downtown? Check them out in this great Sagebrush article. This eclectic hotel with a lot of heart and soul could end up being one of the most unique places to stay in the West!